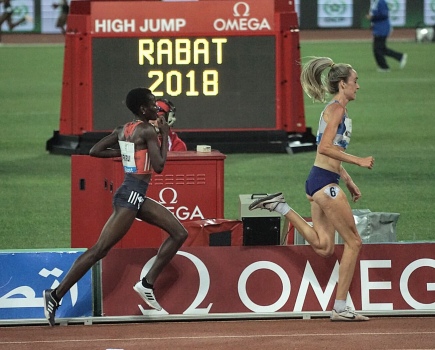 Results of the Diamond League in Rabat

On July 13 in Rabat (Morocco) was the 9th stage of the Diamond League Meeting International Mohammed VI d'Athlétisme de Rabat. The competition was visited by more than 3 thousand spectators.

Our athletes Olga Rypakova and Karolin Kipkirui took part in this launch.

Olga Rypakova in the discipline triple jump among women took the 8th place, jumping by 13.83 in the fourth attempt.

For Olga Rypakova, the main start this year is the Asian Games in Jakarta, to which she plans to reach the peak of her form. The main result of the start was that Karolin Kipkirui qualified for the final of the Diamond League in Zurich.

It is important to note that for the last six months Caroline performed in a very tight mode, she conducted three half-marathons, two ten-kilometer road races, two races for five thousand meters, races to 3000 meters and 1500 meters, while winning first places and occupying the podium.

Ahead of her 2 starts in the US scheduled for the end of July, before the Birmingham stage of the Diamond League, which will be held on August 18.

At the moment, the management of the Club is considering the possibility of reducing its schedule by one start in order to better prepare for the Final of the Diamond League in Zurich.