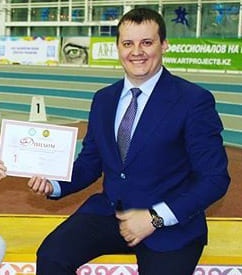 His assessment of the performances of athletes of the East Kazakhstan national team in the first half of the winter season in an interview with our correspondent was given by the head of the regional federation of this sport Denis Sergeevich Rypakov.

How does the Athletics Federation of the East Kazakhstan leadership assess the performance of our athletes in the first part of the winter season?

I think that in the second part of the winter season the performances will be much better. During the first starts, the results are always not too high. Athletes from other regions are trained no less than ours, thereby creating a high level of competition. We have the best conditions all over Kazakhstan, so that the athletes can fully exercise in the winter, but, nevertheless, in the first part of the season our athletes performed a little above average. Of course, I would like to see performances better and more passionately, with high results. We hope that in the next series of starts, in the second half of February will be very interesting.

What is the reason for the noticeable decrease in the number of awards won by East Kazakhstan athletes in the Championship of Kazakhstan compared with the previous three years?

This is due to the fact that now there have been three competitions in a row. Note that in some kinds athletes from the East Kazakhstan region are completely absent. Coaching potential does not deal with some species, considering them not very promising. All develop only those species with which they are accustomed to work, and in which there is a great chance to realize the potential and win medals.

The tournament for Olga Rypakova's prizes continues to hold a high organizational level. What did the organizers succeed in, and are there any developments for the next year?

This year was the best show in all four years. This year, for the first time within the tournament, the children's cup "Altay Athletics Club" Kids CUP was held, for prizes of the athletic club Altay Athletics, for which we express our great gratitude to Askhat Rashidovich Seisembekov and Daniyar Merekeevich Shaimenov. Such a high organizational level is very difficult to hold, because any success is not easy, and with great difficulty. A lot of work has been done, I would like to say a big thank you to everyone who participated in the preparation of the tournament: volunteers, sportsmen, spectators. This year, a large number of foreign athletes arrived, as well as the total number of participants of 140 athletes for 12 kinds of athletics is an excellent result. It's nice to receive positive and sincere feedback from guests, coaches, and also our athletes. This year we have a TV screen, for which many thanks to Askar Baizhigitovich Mozhanov. Special thanks for the help in organizing the tournament of the campaign "Kazzinc", in the person of Andrei Pavlovich Lazarev and our federation of track and field athletics of the Republic of Kazakhstan in the person of Lashin Erkarayevich Aigambetov. Thanks to our school and the work of our team, it was possible to organize such a chic tournament: a live broadcast was conducted, there was a professional presenter, interviews with athletes. There are a lot of plans left, some we just did not want to implement at this stage, since we decided to leave them for the next year. We expect a lot of interesting things, so we plan to expand our geographical coverage to Europe and East Asia.