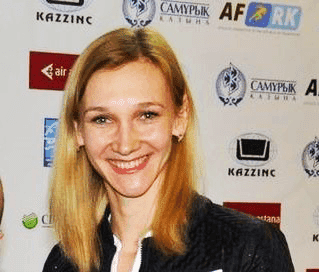 Interview of Olga Rypakova: about the Meeting, the plans for the season and the Altay Athletics club

- Olga, we congratulate you on the successful completion of the IV International Meeting for your prizes! What feelings do you have from the competition and were there any differences between this and past competitions?

- Thanks for the congratulations, very pleased! There were only positive feelings (smiles). This year there are several records of competitions, which makes me happy. The difference between the past starts is that foreign athletes have come in a larger number. Every year the geography of the participants is expanding. I think this time the competitions were more colorful and active. For the first time there was a professional leading and very amusing mascot of our competitions, for whom we are feeling grateful! In particular, I liked the mixed relay of 4 to 200 m, which we have been conducting for several years already. In my opinion, this is the most spectacular and emotional kind in the tournament program. The impressions remained positive, but there are moments that we have taken into account and will be corrected by next year.

- Has the geography of the participants expanded this year?

Last year, eight countries participated: Malaysia, Azerbaijan, Georgia, Armenia, Uzbekistan, Kyrgyzstan, Belarus and Kazakhstan. This year the list of the above countries is preserved, there will not be only athletes from Belarus, but also Tajikistan and Ukraine were added.

- In the context of full preparation for the Diamond League, when are you planning to start the first training camps?

- The first training abroad we are planning from February 14th near Bangkok in Thailand, and we want to prepare well. In March, we will stay in the athletics centre, as it is very convenient for us to conduct training there. But later, most likely again we will leave. These training camps are aimed not only at the preparation for the Diamond League, but in general for the upcoming summer season. Now we are laying the foundation on which we will build further training.

- In addition to the stages of the Diamond League, in which starts are you planning to perform this year?

- In addition to the Diamond League, I will perform in two more competitions - the Asian Games and the Continental World Cup.

- In Kazakhstan last year was remembered by the creation of the first professional athletics club in the country - Altay Athletics, and you are its main and most status athlete, so what are your impressions of the first months of its work and how the appearance of the Club should affect the development of this sport in the Republic?

- Professional Club is the top of the pyramid for any athlete. Creation of a professional track and field athletics club in Kazakhstan is an excellent support and additional motivation for track and field athletes in the country. Through professional Clubs can be increased and attracted the number of children involved in athletics, I'm sure this is a fundamental work, the results of which we will see in the future. Along with this, it is the promotion of athletics in Kazakhstan, and the promotion of the Republic beyond its borders. After all, the Stages of the Diamond League, Grand Prix of the Challenge series have a wide world audience. By the way, for the incomplete Season of 2017, the world track and field athlete learned not only about the Club of their Kazakhstan, but also about the region of Eastern Kazakhstan in particular. The words "Altay Athletics" become customary during international meetings.

It is impossible not to say again words of gratitude to the Akim of the East Kazakhstan region, D.K. Akhmetov, who is an absolutely supporter not only of our Club, but also the whole sport in the region, and even headed the Regional Athletics Federation.

Well and certainly, to us to athletes, it is easier to act and prepare for starts being to Club Members. The club just takes this responsibility: to support us, to help, and also for organizing fees and competitions. With this approach, our results should grow (smiles).

Altay Athletics was the organizer of children's races Altay Kids with prize-winning places from the Club. Will this become a tradition in subsequent tournaments?

- It is a great idea – to make before our tournament children's races on 60 m and relay races. In the Diamond League such practice also takes place. It is very spectacular, and our little athletes feel themselves as part of this holiday, and for them it is a great motivation to act in the framework of the tournament and strive to achieve high results. I really hope, and I think that it is necessary to make it our tradition!