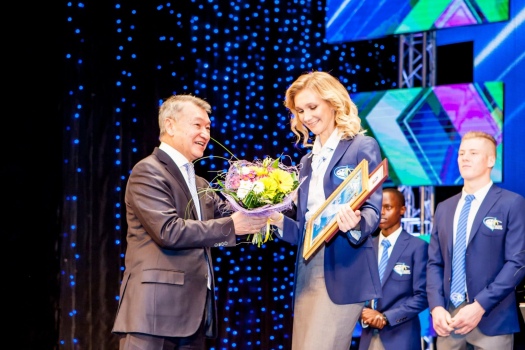 Presentation of the first professional club ALTAY ATHLETICS was held in Ust-Kamenogorsk. It included well-known world-class track and field athletes and Olympic champion, two-time winner of the Diamond League, Olga Rypakova. This was reported by the press service of the Akim (Governor) of the East Kazakhstan region.

It should be noted that the club was established on behalf of the head of the region Danial Akhmetov this summer. For this time athletes have already managed to perform in the top of the world starts and even win prizes. So, in September, Caroline Kipkirui became a silver medalist of the Diamond League-2017 at a distance of 5,000 meters, and Nora Jiruto, 22, took third place in the classic start of ISTAF Berlin in the 3,000 meter race with obstacles.

"It is necessary that, with the example of our remarkable athletes forged and prepared for our future, the new club faces the most important tasks: it will become the base for the formation of the national track and field athletics team for the Olympic Games in Tokyo. We will prepare the Olympic prize-winners and achieve new victories. ALTAY brand was recognizable all over the world, I am sure it will happen, "Danial Akhmetov noted.

Most importantly on the basis of the club in East Kazakhstan will be created the first children's academy of track and field athletics ALTAY KIDS ATHLETICS. It is planned to attract more than 5,000 children and adolescents until 2020. Model athletics professional club ALTAY ATHLETICS developed following the example of the leading European club with a 94-year history - LC Zurich. The General manager of the club will be Guido Tononi, who has worked for more than 30 years in the best international sports organizations.