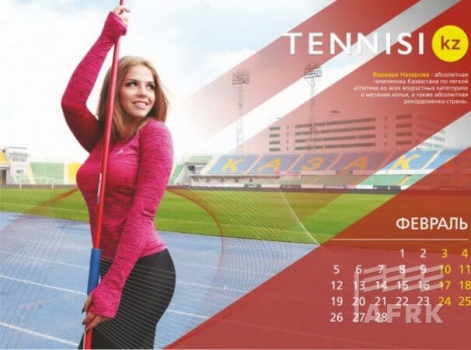 Varvara Nazarova on the page of the annual calendar Tennisi.kz 2018

The Internet edition of Tengrinews.kz launched a poll in which it proposes to choose the "hottest" girl from 12 candidates whose photos entered the traditional calendar for 2018. Among the contenders for the victory are two athletes - Varvara Nazarova and Aigerim Shynazbekova.

The main feature of the annual project is the participation in it of famous and attractive athletes of Kazakhstan. It is undeniably happy that two representatives of track and field athletics - the thrower of the spear Varvara Nazarova and the runner-hurdler Aigerim Shynazbekova - were immediately selected as persons of the new calendar. They represent February and December, respectively.

Competing with the "queen of sports" is not only the champion, but also models, fitness models. For example, Anna Orlova, Galina Snytina, Ekaterina Chekmizova, Karina Kudrin. Ulpan Nurbekova - vice-champion of the championship in bodybuilding "Arnold Classic-2017". Exotic rafting is presented by Alexandra Tislenok, swimming - record holder of Kazakhstan Elmira Aigaliyeva.

Julia Furmanchuk is the current silver medalist of the Kazakhstan bodybuilding championship in the category of "fitness bikini". There is also a beauty in boxing - the owner of WIBA and WBU titles Firuza Sharipova. But Sitora Farmonova from sports is far away - she played in the Major League of KVN in the team "Asia MIX".

Let us note that Kazakhstan athletes have always been famous for their remarkable appearance. And they invariably fall into the annual lists of the most beautiful sportswomen. So, on the pages of the calendar of 2017 there was a photo of the Kazakhstan jumper with a pole of Zhanna Bekbauova.

Support our athletes and leave your voice here.