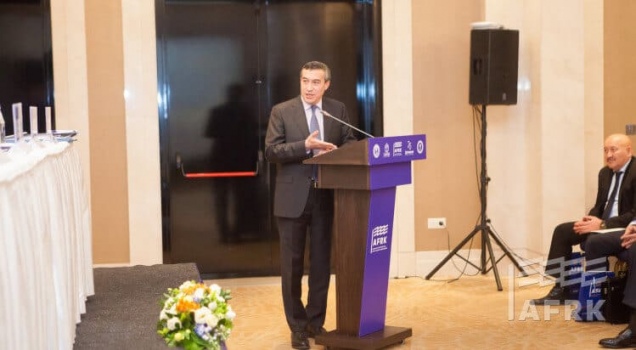 Eldar Tabanov athletics has become more recognizable it is natural

A little over a year ago, the federation of athletics in Kazakhstan was headed by Adilbek Dzhaksybekov. Eldar Tabanov, the first vice-president of the federation, tells about the directions in which the updated team moved in 2017 and what it wanted to achieve.

- What do you consider the main problems that hamper the development of Kazakhstan athletics?

You can talk for a long time about the problems that you had to face right away. This lack of funds for full development, and the lack of training bases. There was no systematic approach to the development of Kazakhstan athletics. This applies to the training of the athletes themselves, coaching staff, and much more. Over this, we started working in 2017.

What is the strategy of the athletics federation in the creation of infrastructure for these sports and, above all, the construction of training bases?

The climatic conditions of our country are not allowed throughout the year to organize an outdoor training process, even in the southern regions. Therefore, in the regions there is an intention to build covered arenas. These are basic facilities and the possibility of full-fledged full-fledged training of Kazakhstan athletes. Now the preparation of design estimates is underway. Such construction requires financial costs, and for one month such objects can not be built. We try to speed up these processes, for example, by using some typical solutions, the principles of public-private partnership with large companies .... But in Astana funds have already been allocated, construction has begun. He is being led by a very serious company. This will be a unique structure that meets all international requirements and with a large number of spectator places. It will be possible to hold world-class competitions in athletics in indoor facilities - this, firstly. Secondly, such a construction will give a powerful impetus to the development of track and field athletics, as well as other sports. Today Astana is one of the most sporting cities in the country. Do you remember how many participants of the SCO marathon were in August ?! Recently, the winter marathon has passed. Even in winter people are ready to engage in athletics, but imagine what kind of effect will be when the arena turns up ?!

- Why do you think that the construction of athletic arenas will give impetus throughout Kazakhstan and for the development of other sports?

It's very simple - take table tennis, modern pentathlon or any other sport. Almost everywhere running is one of the foundations of the training process. And where do all our athletes train in early spring, late autumn or in winter? I'm sure the arenas will not be empty, especially if there are, for example, simulators and other rooms for organizing the training process. Therefore, the arenas, as a training base, will provide an opportunity for the development of all sports.

2017 marked by a surge in activity in the regional federations of athletics.

This is one of the achievements - in almost all regions regional federations have been created. Their tasks are organizing and managing the development of track and field athletics on the ground, creating conditions for coaches and athletes, raising funds. There are already certain results. Take the Atyrau region, where athletics, as a sport has never been. There, a federation was created, headed by its young akim Atyrau. There they held a half marathon, track-and-field tracks were updated in the stadiums, sports grounds were being built at schools. There was an opportunity to provide apartments for athletics trainers to attract staff from other regions.

In East Kazakhstan, the first in the country professional athletics club "Altay athletics" was created. This is a very serious, historic event for our sport. In a number of areas there were marathons and other mass races. All this goes for the development of athletics.

Another trend of the past year - regional federations led by people from the leadership of the regions, local authorities and businesses.

I think that this is also one of the achievements, that the federations were headed by the heads of the regions. This facilitates the work in the organizational plan, allows it to be systematized and gives an opportunity to attract financial resources. Although a lot of money and not needed for the development of such sports as athletics.

- The visiting card of Kazakhstan athletics is the memorial of Gusman Kosanov. What will it be like in the coming years?

These competitions already have authority, they are recognizable. In 2018, there is an intention to raise the bar even higher, starting with the preparation for this event and inviting world-class athletes.

Does the Federation plan to host Asian championships and world-class starts?

Of course, there are such thoughts. But first we need to create a modern infrastructure for athletics, and then already apply for the providence of these major events.

And what is Kazakhstan's track and field athletics that can make money?

World practice shows that the organization of marathons and other mass starts gives certain revenues. We also see how the attitude towards athletics is changing in our country. Over the past year, it has become more recognizable. Large companies start to show interest. We expect that they will become our advertisers or make sponsorship contributions to Kazakh athletics in the form of, for example, construction of district stadiums, payment of contracts with world-class coaches, etc. We are working on this.

Turning to the sports results, what would be attributed to the main achievements of Kazakhstan athletes in the past year?

Of course, I am glad that there is a world-class star in Kazakhstan athletics - Olga Rypakova. She for the third time rose to the podium of the summer championships of the world, winning a bronze medal in a triple jump. And then in the dispute all the strongest won the final of the Diamond League. At the Asian Championships in India on the account of Kazakhstan athletes - 8 medals (4 gold, 2 silver and 2 bronze) and the third place in the team classification among 40 participating countries. The only three-time champion of the continent at these competitions was our runner Victoria Zyabkina. At the World University Games Sergey Grigoriev became the silver medalist in pole vaulting. And already at the end of the season, at the Asian Games in the premises in Ashgabat Kazakhstan athletes took first place in the team event, having won 10 medals - 6 gold, 1 silver and 3 bronze medals.

- And what about those who will be replaced in the future by today's leaders?

We have potential stars, and from different regions of the country. So, in a triple jump - this is Maria Ovchinnikova from the Karaganda region, at the age of 18 she became the Asian champion among adults. Specialists believe that Arthur Gafner from East Kazakhstan can grow into a class athlete. We have talents. The task is to bring them to the big masters.

In this regard, what characteristics will give the head coach of the national track and field team Gregory Egorov?

Firstly, he achieved a lot as an athlete - he won medals at the Olympic Games, world championships, Europe, was the best in Asia. For a long period he lived abroad. In 2017 he headed the national team of the country. He is a competent, thinking person. I saw how Egorov can make decisions, defend his opinion. I think that his appointment is the right decision.

And in conclusion: what in 2018 will, first of all, the efforts of the Athletics Federation of Kazakhstan be directed?

The main task is to give the maximum impetus to the work that was started in the previous year. Efforts will be aimed at creating infrastructure, implementing a systematic approach to the training of athletes and improving the skills of our trainers and judges. And, of course, we hope for new successes of Kazakhstan athletes at the main starts of the upcoming season!