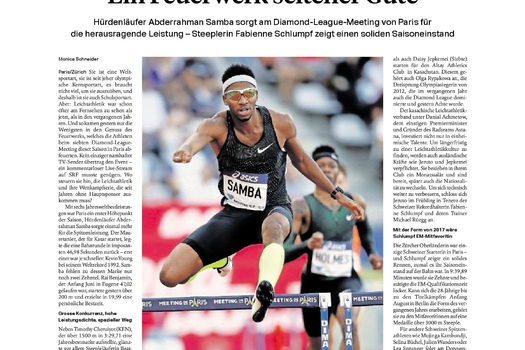 About the Club "Altay Athletics" was written in one of the largest newspapers in Europe - Tages Anzeiger ("Tages Angeriger"), which is a Swiss German-language daily newspaper published in Zurich. It is published since 1893. Circulation - 157 323 copies, the audience - 460 thousand readers. Tages Anzeiger has the largest circulation among the country's subscription newspapers, and it is considered one of the most influential newspapers in German-speaking Switzerland.

In general, the article summarizes the results of the stage of the Diamond League Meeting de Paris held on June 30 in Paris. The article shows the results of athletes from the Altay Athletics such as  Norah Tanui Jeruto, Daisy Jepkimei and Olga Rypakova in this competition, after which they are told that they are members of the Kazakhstan professional athletics club "Altay Athletics". And also, on the establishment of the Club on the instructions of the Akim of the East Kazakhstan Akhmetov DK and in general about the Athletics Federation of the RK.