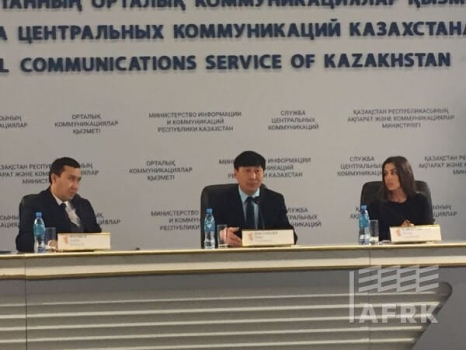 Astana Winter Marathon 2017, the first in the history of Astana, will be held in the Kazakh capital on December 24, 2017. Today, an extraordinary event was dedicated to a press conference at the Central Communications Service.

The members of the organizing committee of the competitions were told journalists about the upcoming winter marathon - the honorary member of the Marat#ON running club that initiated the race, the famous ultramarathonist Marat Zhylanbayev; Azamat Imashev, the head of the directorate for the conduct of sports and mass events of the city akimat, Oksana Khashagulgova, adviser on special issues of the Athletics Federation of Kazakhstan, Sahitzhan Kuanyshbayev, member of the Marat#ON run club.

"The decision to organize a winter race is based on the desire to attract as many Kazakhstanis as possible to the sport, to prove that weather conditions do not interfere with outdoor activities all year round," Marat Zhylanbayev explained.

Competitions include 3 courses: a classic marathon - 42 km 195 m, a half marathon - 21 km and a 10 km race. Registration is open from 12 to 20 December at the site http://www.marathonclub.kz/. Participants of the competitions will receive a winter version of the starting package, and all those who finish will be commemorative medals, winners in three age categories will receive cups and valuable prizes.

Astana Winter Marathon is another stage in the development of mass sports in Kazakhstan, the popularity of such events is growing from year to year. "In 2017 in Kazakhstan, sports-mass races for different distances took place in the cities of Astana, Almaty, Atyrau, Rudnyi, Karaganda, about 30 000 people took part in them. In 2018, the athletics federation aims to help organize similar events throughout Kazakhstan, "said Olga Khashagulgova.

"According to statistics in Astana by the end of 2017, 28% of the citizens regularly participate in sports," Azamat Imashev said, stressing that the capital akimat supports sports events that promote a healthy lifestyle and involve more and more Astana residents in sports.